Julianne Nicholson On The Power of Switching Up Characters

After a series of deeply serious roles, Julianne Nicholson is ready to mix things up. 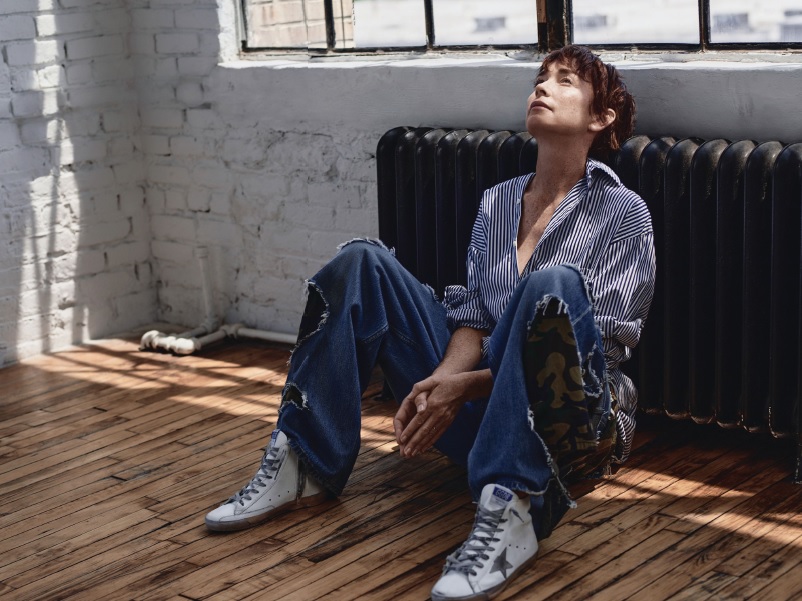 While the rest of America theorized about the HBO crime drama in group chats, Reddit threads and dinnertable conversation this spring, Nicholson had lived her own version of the mystery last year. The story wasn't even finished yet when Mare executive producer and star Kate Winslet asked Nicholson to play the best friend of the titular small-town police detective. Viewers watched the murder mystery unravel on screen, but Nicholson read it on the page as she’d pore over each script.

Like many viewers observed, Nicholson knew she hadn’t signed on simply to play a beleaguered wife. Why cast such a talented, reliable actress in a thankless role? Eventually, the payoff for Nicholson’s character came in the form of a devastating finale heart-to-heart with Winslet, the kind of scene any actor would covet and the kind of emotional gut punch at which Nicholson and Winslet absolutely excel.

“The show itself was so good,” says Nicholson. “When I read it I thought it was so wonderful, and I love Kate and all the creative people involved with it so I was excited to do it anyway, but it was a relief to get my teeth into the meaty stuff at the end.”

That kind of meaty drama is the stuff seasoned character actors like herself make a living doing—showing up, crushing every scene they’re in and heading to the next project. It’s what Nicholson has done in more than 60 film and television credits over the past 25 years, jumping back and forth between the two mediums way before TV became the coveted place for creatively starved A-listers.

But Nicholson has always loved switching things up. “It’s great to do TV because more people can see the work that you're doing,” she says. “And it’s great to do film for a whole host of other reasons. To be able to go back and forth is the ideal.”

The one thing she doesn't ever want to do is get too comfortable. After Mare and the 2020 Stephen King adaptation The Outsider, “I need to take a pause from grief,” she says. “Unless it’s a crazy opportunity or there’s something that I can’t say no to, in general it’s like, ‘That's actually a no for right now.’ And when you say no, that opens the door for other opportunities,” she continues. “For me, it’s exciting to do something that I haven’t done before—go to a different place, a different time period, a different part of the world. That’s exciting to me.”

Even the photo shoot for this story—which took place a few days before she and her family jetted to the U.K. to see family for the first time in two years—provided ample inspiration. One of her looks involving a plaid suit and a cowboy hat (“I call it my Lil Nas X,” she says) made her realize she needs to play a cowboy.

“I loved the roles that I’ve had in the last couple of years, but I don’t want to be in a small town dealing with some horrific crime again for a minute,” Nicholson says. “I want to take a little pause on that and do something wildly different again. Why not a Western? Something just wildly different from what I’ve been up to.”

First, though, she has to finish the Mare of Easttown promotion cycle, which now involves press for the whopping eight Primetime Emmy nominations the series received, including a supporting actress nod for Nicholson, unbelievably her first major acting award nomination. And maybe she’ll eventually find time to watch the show too. She’s actually seen just one snippet: the viral scene where Evan Peters drunkenly hits on Winslet in a dive bar. “I thought that was some of the best acting I’ve ever seen,” she says. “It was so beautiful and funny and vulnerable and just so good.”

Currently, Nicholson is working through her pile of to-read books (recently finished: Brit Bennett's The Vanishing Half, Kevin Wilson's Nothing to See Here). When she returns stateside, she’s headed to L.A. to film HBO’s star-studded ’80s-set Los Angeles Lakers drama. And after that, she’s re-teaming with Mare producer Wiip to adapt Laura Zigman's novel Separation Anxiety into a TV series—a starring vehicle for herself.

“It’s a very beautiful, thoughtful, hilarious, honest description of what [middle age] looks like,” says Nicholson, who’s excited to dive into the producing side of things. “It’s [in the] very early stages now, but I’m excited to be in from the ground up and be able to pull people together to make it the best it can be."

Photography by: Victoria Will